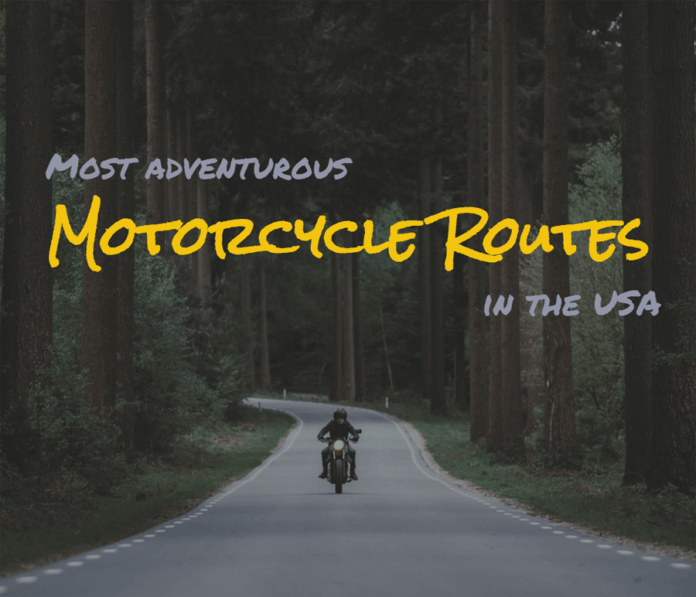 Riding a motorcycle activates the prefrontal zones on the Brain, which build up higher levels of concentration. The advantages of bike riding are not just mental, they are altogether physical also. You can get your whole day exercise through riding.

Moreover, Touring by motorcycle gives you an enhanced sense of FREEDOM AND THRILL that you could not get from inside a car. Here, we have pulled together 14 most adventurous routes to ride down in the USA:

1. Tail of the Dragon, Deal’s Gap – North Carolina and Tennessee

With its 318 tight turns in 11 miles, Tail of the Dragon at Deals Gap is widely considered to be America’s #1 motorcycle road, located at the intersection of US 129 and NC 28.

Bordered by the Great Smoky Mountains and the Cherokee National Forest with no intersecting roads, The Tail of the Dragon offers apparently uninterrupted entertainment throughout the spring, summer, and fall.

Tip: The nearby Cherohala Skyway is rapidly turning into a riding goal as well, with its remote 60 miles of stunning picturesque mountain highway.

Sweeping curves and breathtaking views are only a couple of reasons why motorcyclists love to ride the Blue Ridge Parkway.

Tip: It is recommended to plan for at least two days to enjoy the ride. Also, there are no gas stations on the parkway – but not far off the Parkway.

Beartooth Highway is a 68-miles stretch of US Highway 212 between Red Lodge and Cooke City, Montana, consisting of many steep zigzags and switchbacks.

Tip: The pass is only open from mid-May to mid-October due to snow.

Pacific Coast Highway a.k.a. California State Route 1, is one of America’s most scenic roadway.The most adventurous part of the ride runs through Big Sur, which offers distracting scenes of redwood forests, crashing waves and enough turns to keep you satisfied start to finish.

Tip: It is recommend to avoid ride on summer weekends due to heavy fog.

The Peak to Peak Highway, a 55 miles long and about 2 hour drive, provides matchless views of the Continental Divide and its timbered approaches.This is Colorado’s first scenic byway.

Going-to-the-Sun is an epic 50 miles mountain road that cuts through Montana’s Glacier National Park. During your ride you will enjoy beautiful valleys, glaciers, cascading waterfalls, mountains and colorful flowers.

Tip: Start early, plan ahead and be prepare for changing weather.

Coastal section of Maine’s US Route 1 is one of the most interesting and scenic road trips in America, especially the 167-miles stretch from Brunswick to Machias.

Tip: It is recommended not plan trip on Summer Time.

This route starts in Panguitch, Utah and follows US Route 89 South to reach Route 12, which will take ideally two days to complete with an overnight stay. The 124-miles stretch provides amazing scenery aroundBryce Canyon and Capitol Reef National Parks and the Petrified Forest State Park.

The Grand Staircase-Escalante is considered one of the best motorcycle rides in the USA, with Multi-colored cliffs, buttes, plateaus, and canyons.

Natchez Trace Parkway is one of the oldest and scenic routes in America, spans 444 miles between Natchez, Mississippi and Nashville, Tennessee.

The two-lane Parkway is Motorcycle-Friendly, and has a gorgeous scenery consist of rural farms, wooded hills, friendly wildlife, and breathtaking overlooks.

Tip: Commercial traffic is prohibited and the traffic is generally very light except around Tupelo and Jackson.