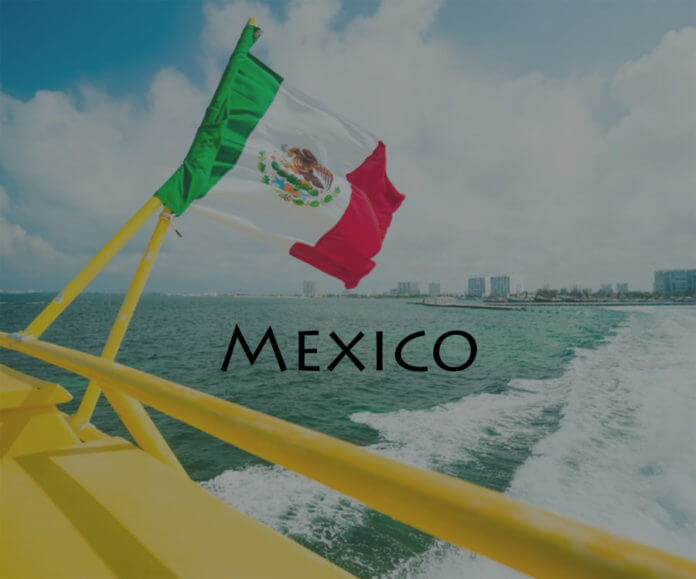 Why do tourists keep coming back to Mexico?

When in Mexico, tourists are often confused about where to begin their vacation or which attraction to see first! This country is truly diverse and has everything from beaches, nightlife and even lots of culturally rich places that show off the history of Mexico.

Initially, it was a great place for a lot of North Americans who wanted to get away from life in the city. But today, Mexico is attracting people from the UK, Ireland, India, and several other places too. This is because Mexico tourist attractions are unlike any other. For example, the Mayan and Aztec sites are among the oldest UNESCO Heritage sites and that remain unchanged for centuries.

One can enjoy stunning sceneries that the endless sunny sandy beaches like the Mayan Riviera, Cancun, and Baja have to offer. There’s even more that hasn’t been mentioned yet, so we’ve made a list of the best and safest places in Mexico here.

The Gulf Of Mexico Coastline 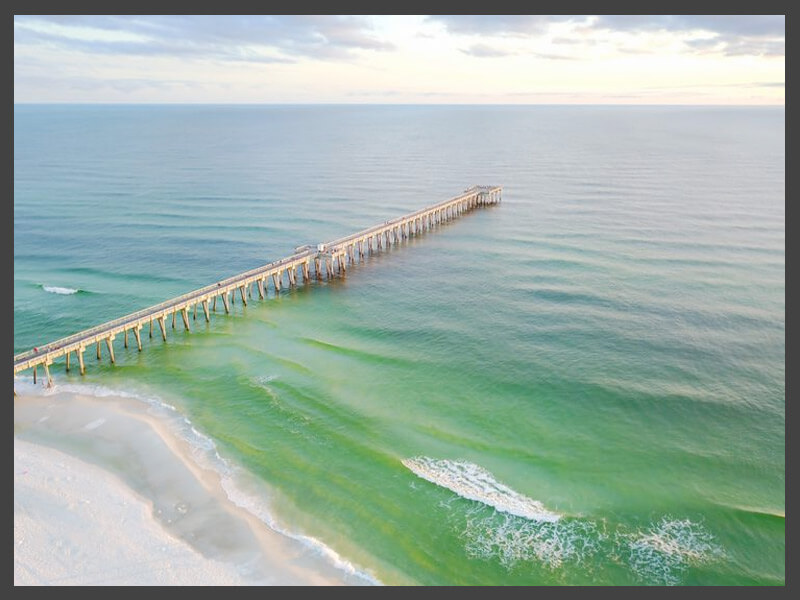 The Mexico beach destinations are, without a doubt, the best in the world. The most frequented are the resort destinations in the Mayan Riviera on the Gulf Of Mexico coastlines, comprising of the Cozumel Islands, Playa Del Carmen, and Cancun. This place draws 5 million people each year, but the beaches never seem to get crowded.
The long stretch of crystal clear water offers activities like reef snorkeling, scuba diving, swimming with stingrays, dolphins and tropical fish. The best tourist attraction, however, is the underwater museum where one can sculpture submerged up to eight feet under water. 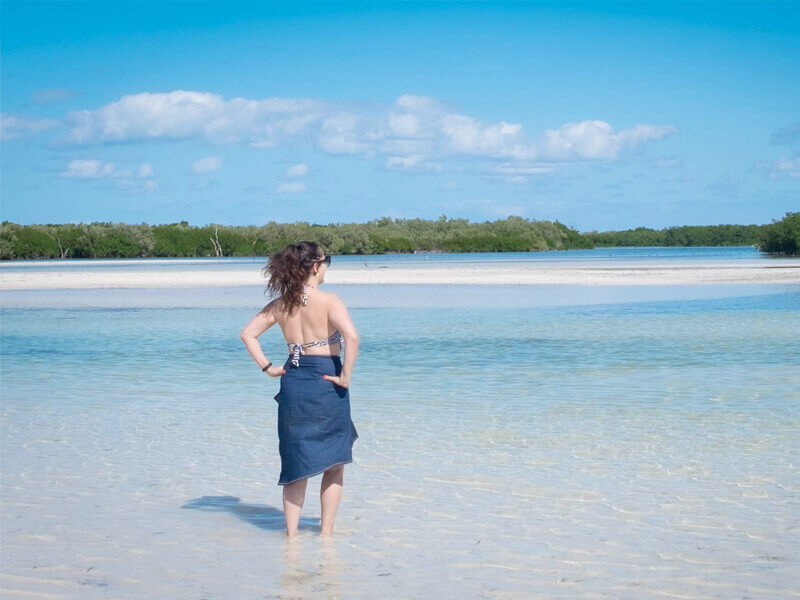 If a fun sea adventure is what you’re looking for, go to places like Akumal and Isla Holbox. Akumal literally translates into the ‘Place of Turtles’. Sea turtles come to the shore to lay their eggs each year. Visitors come in from Tulum and Playa del Carmen just to see this, swim with these baby turtles in the shallow lagoon.

Isla Holbox has less traffic, sandy streets. During summer, water might not be clear but visitors can swim along with whale sharks. This place is also home to over 150 species of birds, including pelicans and flamingoes. 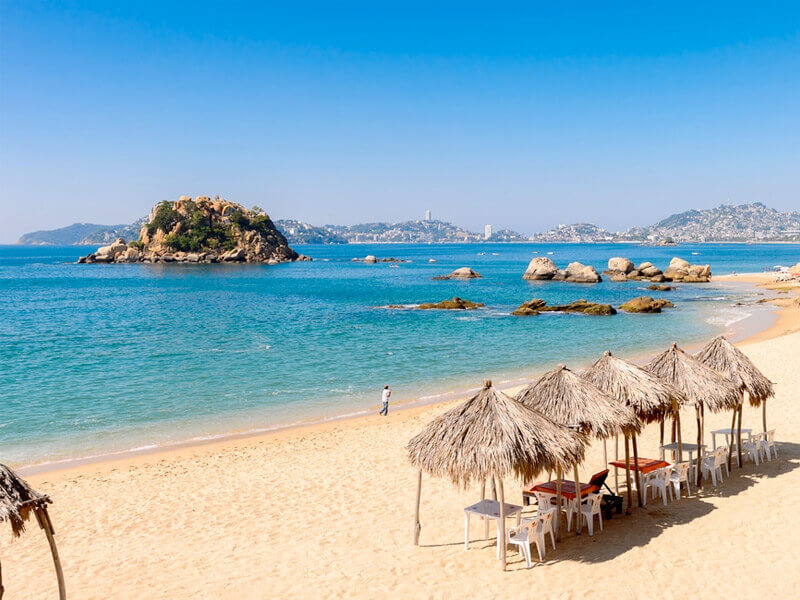 Acapulco is the place where all the best beach parties happen. It gained its reputation in the 1950s when Hollywood stars like Elvis Presley, Frank Sinatra, John F. Kennedy, and Elizabeth Taylor visited this place! This is the place that welcomes thousands of college students during the popular Spring Break for the bustling nightlife, waterfront promenade and exceptional cuisine.

#Take a Step Back in Mexican History 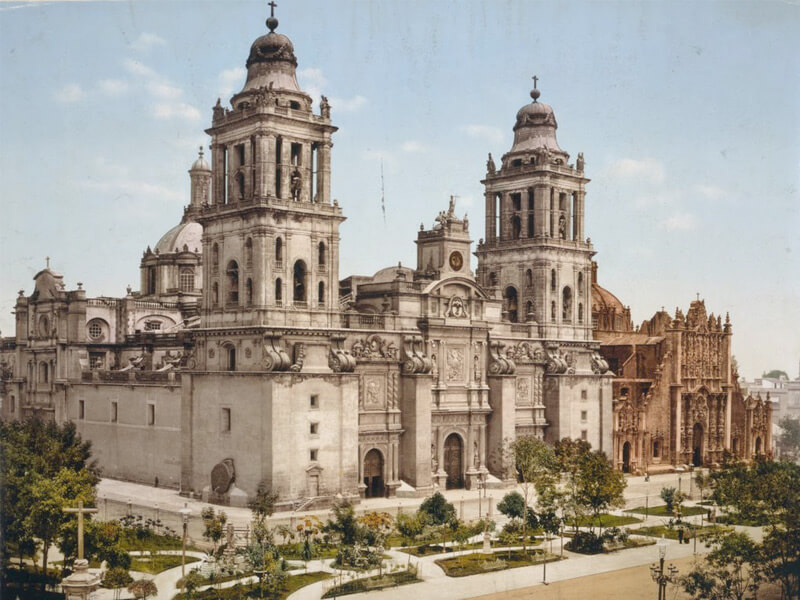 Mexican tourist attractions vary in the kind of experiences they offer. If you’re in Mexico during the summer or monsoon when the beaches are off limits, try the destinations inside the city instead. You can start with the La Catedral Metropolitana that has a blend of architectural styles and built-in 1573.

While this cathedral shows the start of the colonial era, tourists can get a view of the other side of Mexican history in the Teotihuacán archaeological site. This is a massive maze-like city that housed a society even before the Aztecs, and very little is known about them. 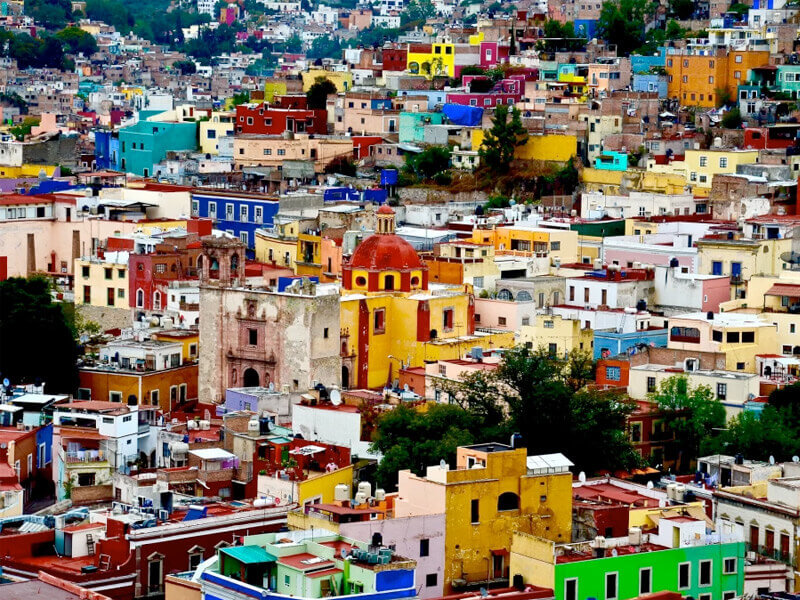 One of the safest places in Mexico that gives you an idea of life in modern Mexico is the Coyoacan neighborhood, which still has vestiges of traditional Mexican customs. It’s a beautiful sight with winding cobblestone streets, bright yellow buildings with red accents.

This place has the Cuidad Universitaria and offers the best art pieces including Frida Kahlo Casa Azul. Another similar place is Ciudad Amarilla or the ‘Yellow City’ – because all the buildings are painted yellow! Other places include the Merida, Mexico City, Guadalajara to name a few. 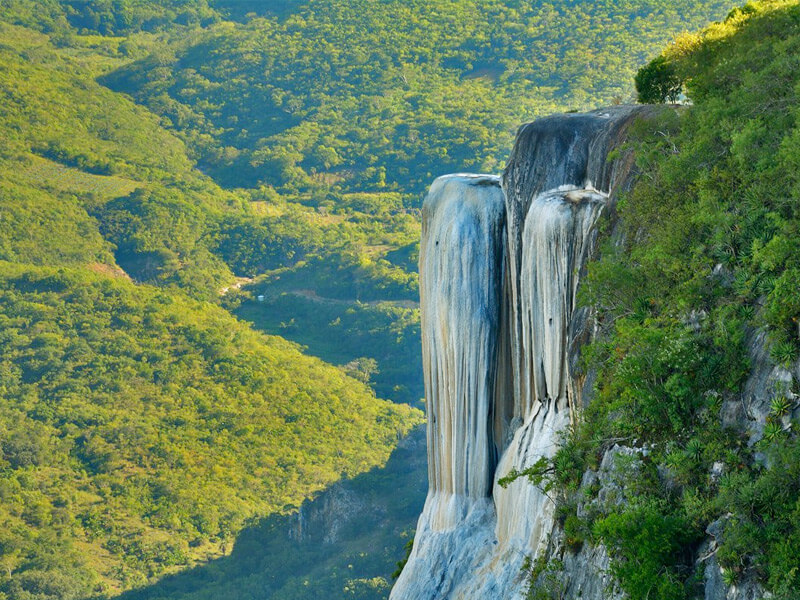 Among the safest places in Mexico to visit are the smaller lakes that are a great hiking and camping destination. Take the Hierve el Agua in Oaxaca, known as the frozen waterfall, because it is actually a rock formation that resembles flowing water. At the very top of this rock, is a series of man-made lakes where one can spend all day in, surrounded by thousands of hills, trees, etc. 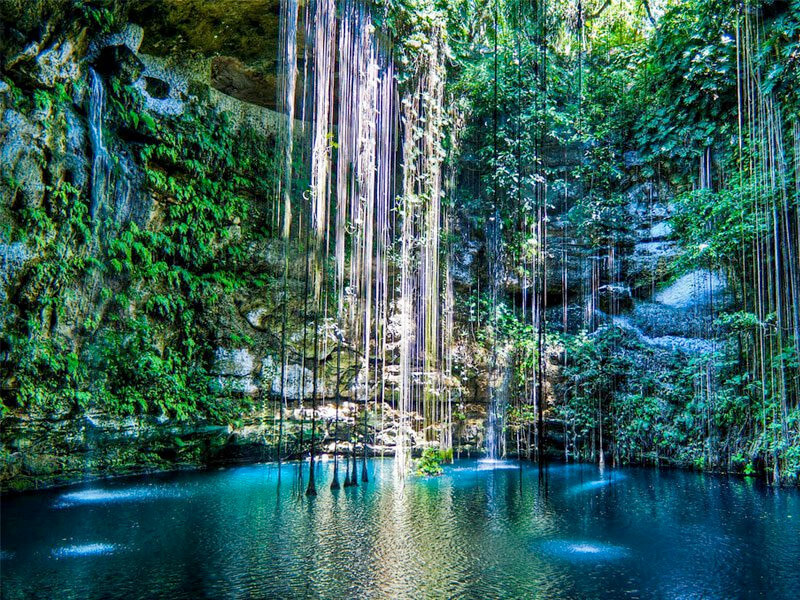 Another similar attraction closer to nature is the Cenotes in the Yucatan Peninsula. Out of the thousands of cenotes here, the most popular ones are the Dos Ojos just outside Tulum and Ox Bel Ha, the largest underwater cave network. 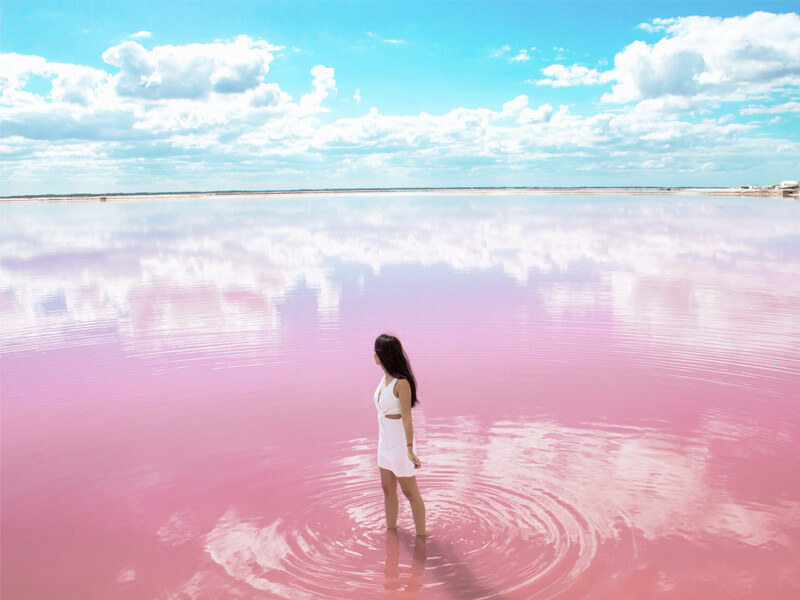 The Las Colorados situated in the Yucatan, close to Merida, are salt lakes that are pink in color. On a still, windless day, one can easily see the sky reflected on the top of these lakes, just like a giant mirror. 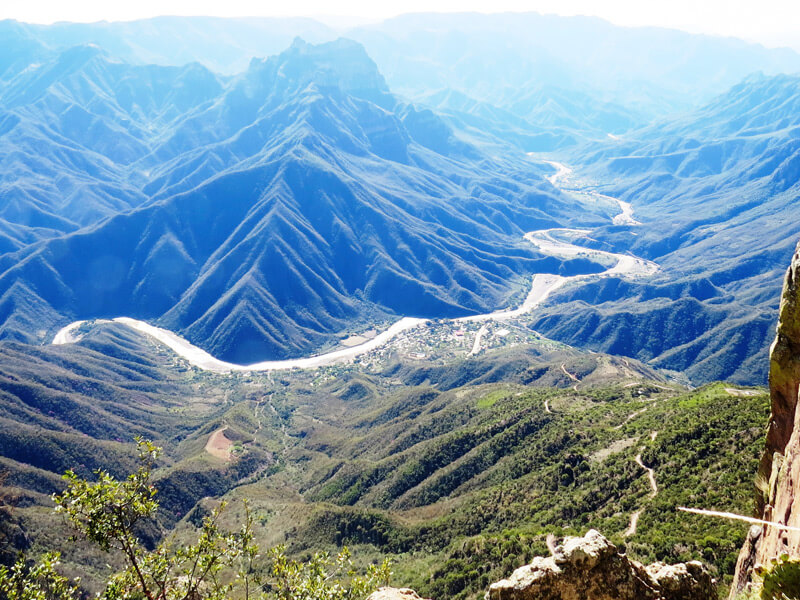 In Chihuahua, you have the Barranca del Cobre or Copper Canyon. This is a valley like an area with a river running through it surrounded by miles of trees. The only way to access this place is by booking a ride on the El Chepe train. 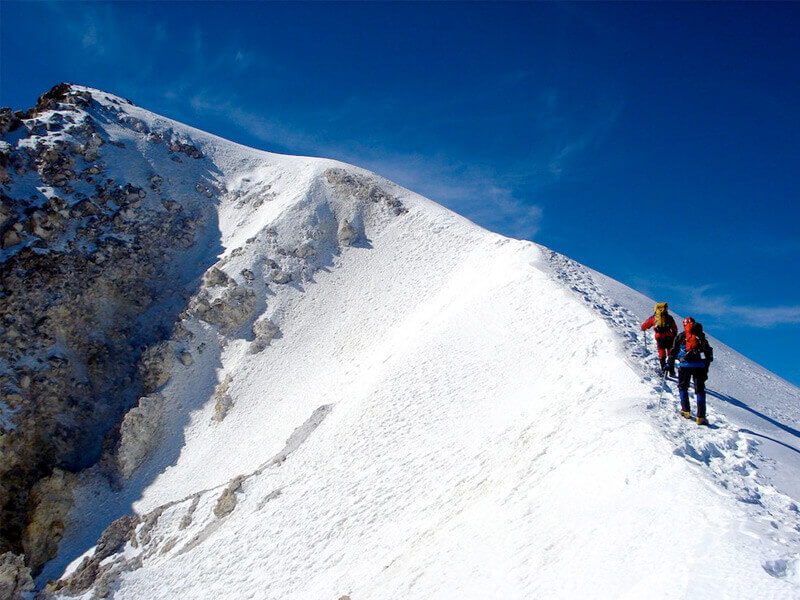 If you don’t like swimming, then the next ideal location is the Nevado de Toluca. To reach this place, you have to travel for about a day from Mexico City. In this way, it’s more accessible than the Pico Orizaba, the tallest peak in Mexico.

Some of these peaks offer you a full 360-degree view of certain areas of the city. One of these is the hill with the Pipla monument in Guanajuato. You have to scale this mountain and reach this monument before you can fully enjoy this view.

The Eden Mine Cable Car Ride 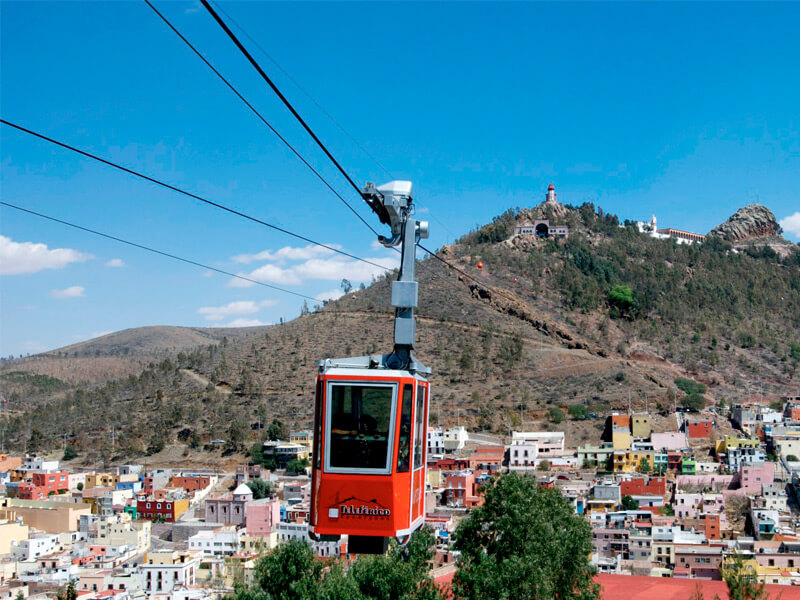 The other destination is the Mina El Eden or the Eden Mine. This place has a bar and one can take a cable car to explore this mine during the day and return back in the night for a drink. During the day, when higher up in of these cable cars, you can get an aerial view of the city.

#Live it up in these Events 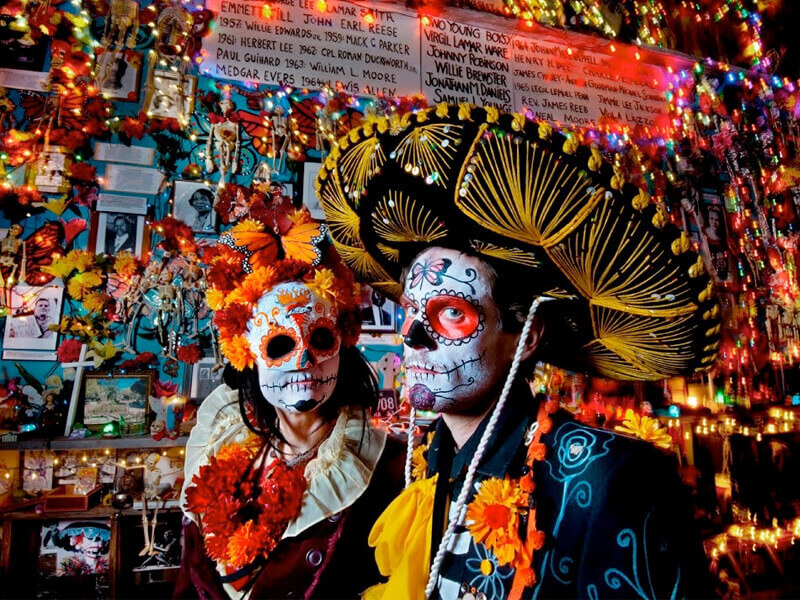 Mexican culture has a lot of festivals that are now popular tourist events, they’re a mix of religious, cultural and community-based events. The biggest festival the Day of the Dead, that happens during October and November. In this event, families pay their respects to deceased loved ones through offerings of food placed in cemeteries. One of the venues is the Isla Janitzio within Lake Patzcuaro frequented by locals and tourists during this festival. 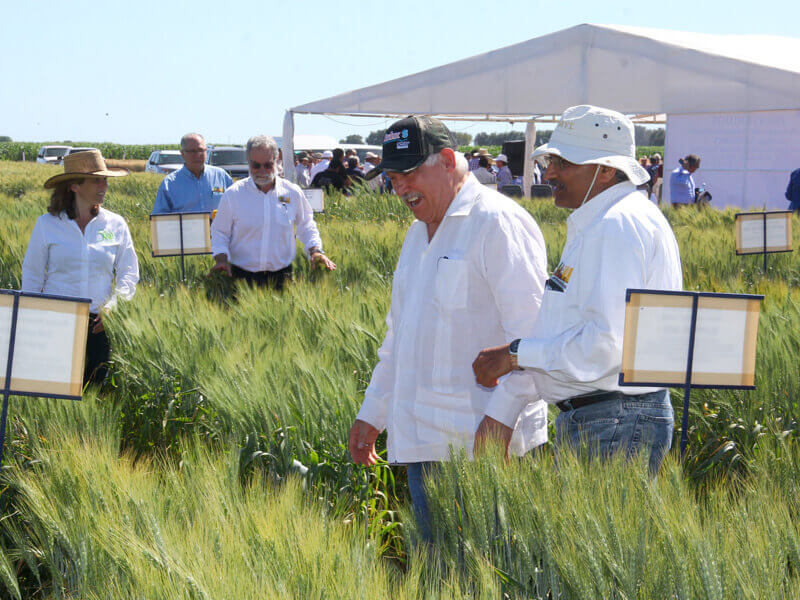 Then there is the Radish Festival in Oaxaca, and nature conservation programs like the Monarch Butterfly migration and the releasing of baby sea turtles. 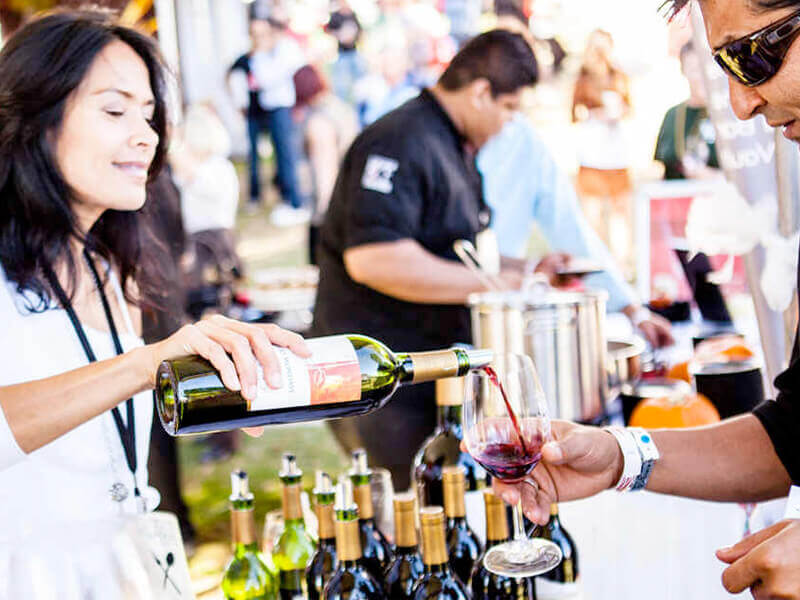 Other festivities worth seeing is the St. Peter’s Fair held at Guadalajara in Tlaquepaque and the Dia De Locos or Day of the Crazies held in San Miguel de Allende. These two events take place sometime in June.

If you’re in Mexico during August, make sure to stop by the Fiestas de la Vendimia, a wine festival held in Baja California, Ensenada. Then, in November the annual Puerto Vallarta takes place. This is a food festival that is a competition among thirty of the best chefs in the world and is literally a feast for the soul!

So, with all these places in mind, you can begin planning your trip to Mexico. But it has to be during the right time of the year in order to fully enjoy the country. Tourists have been asked this question about what is the best month to go to Mexico? They all agreed that September was the best time. This is because in September, the heavy rains subside and temperatures begin dropping down to more bearable level!

Of course, you can visit any time you like really. Remember that Mexico is a warm country and if you’re visiting from a colder region, summer heat might be too much to handle. Also, some of the attractions, especially the beaches, will be better during September.

It’s also a time when there’s much less traffic and crowds, as children go back to school after a long summer vacation and traveling around the city using public transport, will cost much less. To fully understand what is the best time to go to Mexico, you need to get a better idea of the festivals, events, and kind of Weather they have.

These things will differ from one tourist to the next, based on what they like and what they wish to see in Mexico. Some of these public events may not happen in September, so in that case, you can choose another time of year. Whether you choose to go see the natural beauty of the Yucatan Peninsula, soak up the sun on the Baja beaches or take part in local festivals, you will never run short of things to do in Mexico. 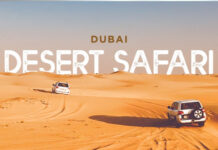 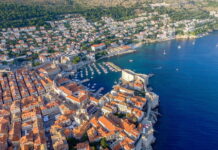 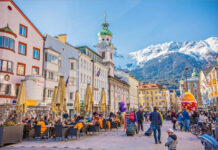 Innsbruck: A Colorful, Picturesque Town Located in the Austrian Alps

Skiing & Snowboarding in New Zealand: All You Need to Know About

20 Most Adventurous Ski Resorts in the World

Explore the Best of Croatia! 10 Best Places to Visit in Croatia

ABOUT US
TravelingNext is your ultimate travel guide to find the best places, beaches, holiday & weekend gateways and things to do in and around the city. Expert travel tips to invent your NEXT trip.
Contact us: [email protected]
FOLLOW US
© Copyright 2022 - TravelingNext. All Rights Reserved.